I remember watching a repeat episode with the seafood chef Rick Stein on his travels in France and he made a Pithivier. It really did look temptingly good. Pithivier pronounced [pee-tee-VYAY] are large round, enclosed pies normally made with puff pastry which is then traditionally filled with frangipane, also known as almond cream. Then pastry top is then finished off with a glaze, either by egg-wash or by the caramelising a thin layer of sugar at the end of the cooking process. 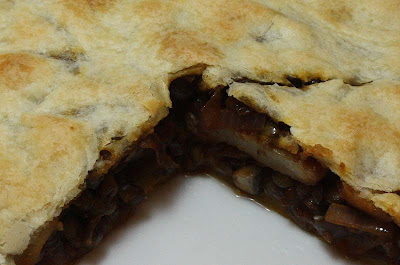 You will also find savoury versions of this pithivier, sometimes filled with meat or cheese. I decided to make a savoury one with a seasonal vegetable: the Jerusalem artichoke. Oh and one more thing about pithiviers, the tops are traditionally and skilfully decorated in the style of scallop shells, well as you can see mine is not at all elegantly presented but it sure was flavourful and nutty. 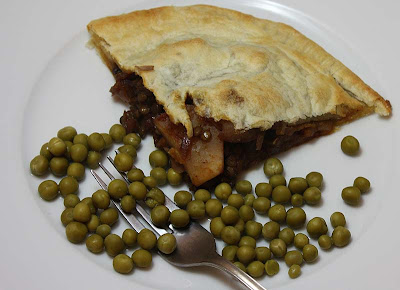 Unfortunately, Jerusalem artichokes are not appreciated by everyone, one of the reason for this is its after effects on the human body: flatulence, but my attitude it, if you only eat it a couple of times during its season, it’s a small price to pay. 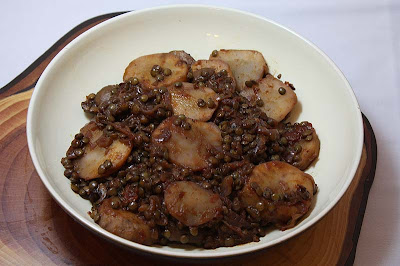 Jerusalem Artichoke and Mushroom Pithivier
Serves 4
Ingredients
260g peeled Jerusalem artichokes, thinly sliced (2-3mm)
3 - 4 shallots, thinly sliced
2 tbsp olive oil
150g chestnut mushrooms, sliced
Sprig of rosemary
100ml red wine
250g tinned chopped tomatoes
1 tbsp tomato puree
60g puy lentils, cooked
375g ready rolled puff pastry
Optional: 1 medium free range egg or 1 tbsp soya flour mixed with a little water to glaze
Method
Heat Oven to Gas 4/200C/400F
Saute the artichokes and shallots in the olive oil in a large frying pan until softened and slightly golden. Add the mushrooms and rosemary and cook for a further 2 or 3 minutes before adding the red wine, chopped tomatoes and tomato puree. Simmer for 15 minutes or until sauce has thickened. Remove the rosemary sprig and add the cooked lentils.
Roll the pastry sheets into two thin circles, but make one slightly bigger than the other. Place the smaller on a baking sheet and top with the filling, leaving enough of a border. Cover with the larger circle, pressing the edges neatly together and crimping with your fingers or a fork. Make a hole in the centre and brush the pastry with the egg or soya glaze and bake for 20 – 25 minutes until puffed and golden. If you wish you can make 4 individual pithiviers. Adapted from the Vegetarian Society. Original recipe can be found here.