Oh not not another Apple Jar recipe! I promise this will be the last Apple jar recipe on this blog, for this year at least. That is not to say, that I don't have any more apples, I certainly do but I think there is enough to make either a humble, homely Apple pie, Upside down Toffee Apple cake, Apple muffins or maybe some Apple flapjacks later this week.

Back to todays recipe. I actually made this Spiced Apple Chutney in September but had not got round to posting it on my blog. The original recipe can be found here and is made on the stove taking about 2 hours from start to finish. This particular weekend, I recall that I did not want to be standing looking over the pot - stirring too often, so I decided to make it in the slow cooker. Although it took longer to make, it did release me to get on with other exciting things such as house cleaning, laundry and composting. This was a day to stay in-doors. 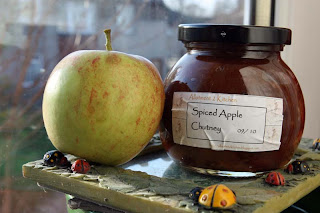 Spiced apple chutney
Cooking time in Slow Cooker: 6 – 8 hours
Makes 5 x 296g jars
Ingredients
Medium onions, sliced and chopped
1kg cooking apples, cored and chopped
110g sultanas
15g ground coriander
20g paprika
15g allspice
15g salt
340g granulated sugar
425ml malt vinegar
Method
Put all the ingredients into the slow cooker. Turn high for the first hour, then turn low.
Stir from time to time to stop the chutney sticking to the pan.
When it is very thick and you can draw a wooden spoon across the base of the pan so that it leaves a channel behind it that does not immediately fill with liquid, the chutney is ready.
Turn into sterilised jars, seal and cool.
Store in a cool, dark cupboard for two to three months before eating.