As promised here is the Apple and cinnamon jelly recipe. 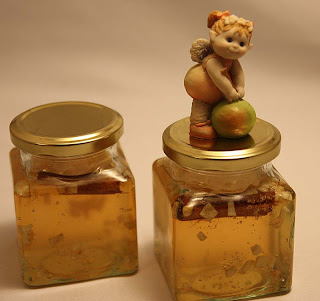 Unlike the Rosehip and Melon jelly, the one thing I noticed about this recipe was the amount of scum (white froth or form) rising to the surface. This scum actually comes from the fruit, it is harmless and just doesn't look pretty at the final stage or in the jar, so it has to be skimmed off with a ladle. This was the only bit that was a nuisance, but other than that it was pretty straightforward to make. I know some people stir in a little butter towards the end, but I don't. 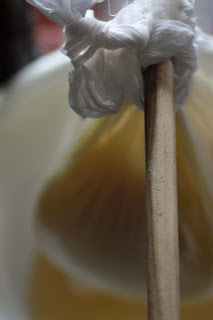 Apple and cinnamon stick jelly
Makes 5 - 6 x 245ml jars
Ingredients
1.8kg (4lbs) cooking apples, remove any bruised bits, otherwise just chop all of it, keeping skin, core and pips
2 tablespoons of fresh lemon juice
Water
Fat stick of cinnamon, broken in half
450 g of granulated sugar for every pint of juice obtained
Optional: grated or finely sliced pieces of peeled eating apple
Method
In a large preserving pan, put in the chopped apple pieces, lemon juice, cinnamon stick and cover with just enough water. Bring to a boil and simmer for about 30 minutes until soft. Mash thoroughly to extract as much juice as possible. Strain through a jelly bag or muslin-lined nylon sieve (my was a home-made device again - see above), set over a large bowl. Do not press the fruit or squeeze the bag as this will make the jelly cloudy. Leave until the dripping stops. This may take several hours or even overnight. I tend to leave it overnight. Next, measure the liquid and return it to the pan along with 450g sugar for each pint of liquid. Stir well over a low heat until the sugar has dissolved. Optional: add finely chopped pieces of peeled eating apple to the jar. Increase the heat and boil rapidly for 10 -15 minutes. Test your jam for a set — setting point is 105C (220F). If necessary, boil for longer and keep testing, until the jelly has reached setting point. Remove the pan from the heat, skim off the scum with a ladle and allow to cool briefly. Carefully pour into hot, sterilised jars. Seal the jars and allow the jelly to cool completely before labelling and storing.