Snake Beans In My Kitchen

I have lots of new things in my kitchen, like new tea-towels and a new kettle and a gorgeous retro umbrella shaped cake stand that I picked from Crock and Cosy in Rye, East Sussex, but I haven't got round to taking a picture of any of these, so this is a short post to share some things that I have managed to photograph  in what is becoming a dark kitchen with the changing season. 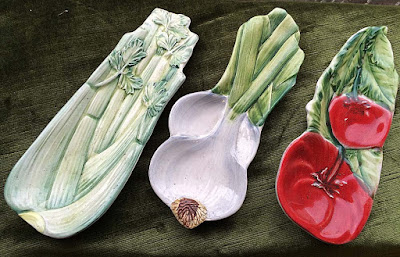 I picked up these ceramic celery, garlic and tomato pieces from the flea market in Bristol a little while back.  I am not quite sure of their purpose, but they could serve either as spoon rests or to hold olives maybe, or maybe they are just designed to be admired.  The vegetarian and vegetable grower in me could not resist bringing them home with me. 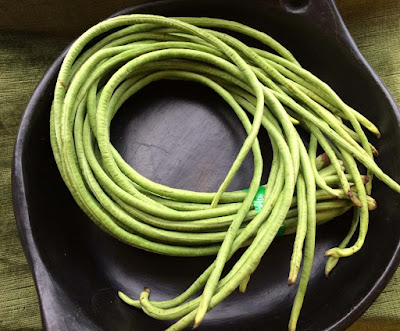 I've purchased Snake Beans also known as Yard Long Beans from the Bangladeshi grocers before, but forgot about them and then turned brown and had to be put into the compost bin.  I have a couple of ideas what I want to do with this.  the obvious thought would be a Bangladeshi curry which is what the woman at the grocers advised, but I am still thinking about it.  Have any of you cooked with Snake Beans and have any new ideas for me. 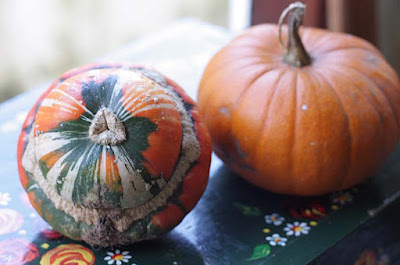 Some little pumpkins picked up from a farmers market.  Too pretty to eat, at the moment they are still on my table being admired, but they will be consumed soon, perhaps in a pasta salad for a working lunch. 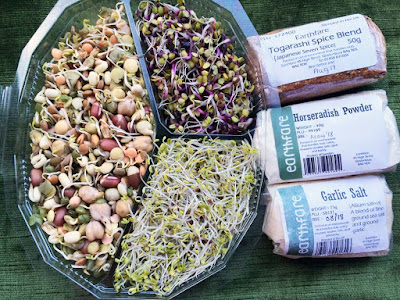 We went to Glastonbury not last weekend, but the before previous and I loved visiting Earthfare Wholefoods.  I could have spend a good hour in there browsing the shelves, but.  I picked up some sprouts and some spices including Tograshi Spice Blend (Japanese), Garlic Salt and Horseradish Powder which I used yesterday for my Beetroot and Horseradish Popcorn. 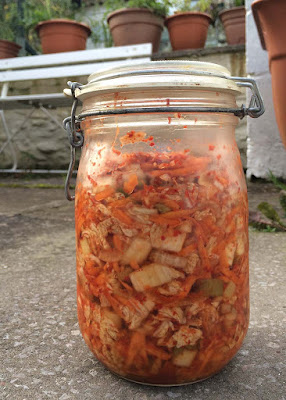 Some of you may remember that a little while back I picked up some Korean Chilli Powder, well I finally got round to making some vegan Kimchi at home.  It is still fermenting.  I will give you my verdict soon.  A friend at work of Slovac heritage also gave me a jar of homemade Dandelion honey, which I hope to share later in the month with you as its accidentally vegan - she had not intended it to be vegan. 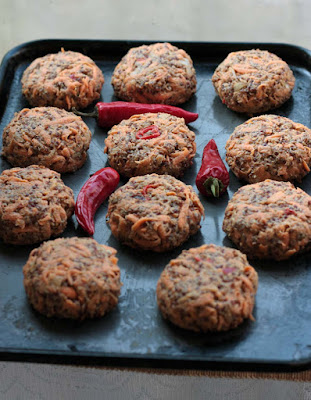 I had the nephews and nieces over early in the month and made some Red Quinoa, Sweet Potato  and Chilli Burgers adapted from my Parsnip and Quinoa Burger recipe.  I do like a good veggie burger, its just a shame I don't make them as often as I used to a couple of years back when I was running the vegetarian cafe. 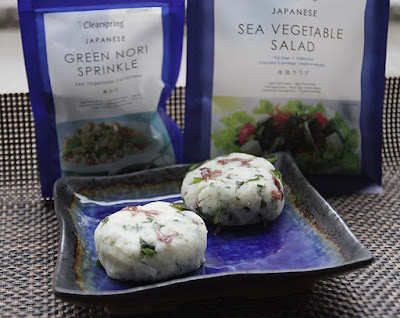 I have been experimenting a lot with Japanese Sea Vegetables Salad and Green Nori Sprinkle.  Some of you may remember my luxurious Vish Ocean Pie.  The latest being these Fish Free Sea Vegetable Cakes.  I will share the recipe soon as these are vegan. 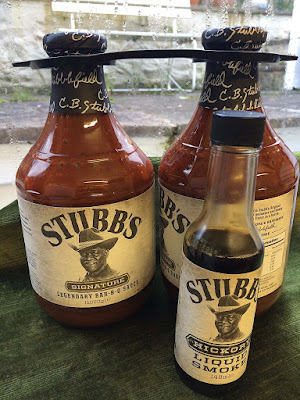 I have some large bottles of Stubbs Legendary Bar B Q Sauce.  Majority of Stubbs products are suitable for vegans and vegetarians.   I am looking forward to using it for Buffalo Cauliflower Wings.  I have been using Stubbs hickory liquid smoke for a while, mostly in my facon bacon, including the most recent coconut facon bacon and seitan variation too. 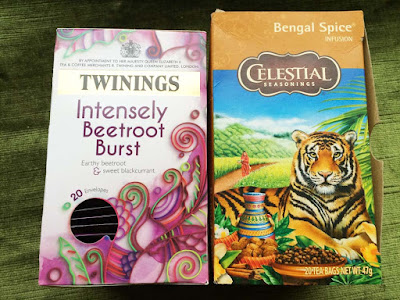 A friend at work introduced me to Twinnings Intensely Beetroot Burst Fruit teas.  I drink the lemon and ginger a lot, but these were new and I liked them very much, so I have been drinking it a lot and in the evenings I always have a cup of my favourite Celestial  Bengal Spice, the spices hit me right in the back of the throat which I like and the smell is amazing too. 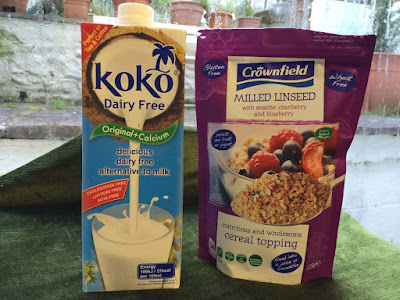 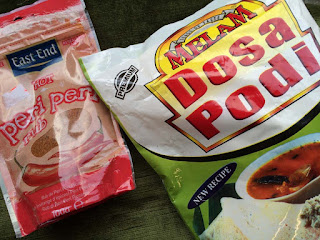 And finally some Peri Peri Rub and Dosa Podi flour mix.  I'm looking forward to playing with this during the weekend.

I am sharing this Vegan Mofo edition of  In my Kitchen with our new host Bizzy Lizzy's Good Things.  In My Kitchen is a event for food bloggers to share what in their kitchen from all around the world, it was started by Celia who blogs over at Fig Jam and Lime Cordial.     If you interested you may want to take a peek at  Vegan Month in my kitchen last year.