One of the aims of Refugee Week is to promote positive encounters between asylum seekers and refugees and members of the receiving communities, as well as raising awareness.   The theme for Refugee Week for 2016 is Welcome.  As my blog is a vegetarian food blog my Simple Act is to Cook A Dish from Another Country and try and raise some awareness that way among some of my readers. 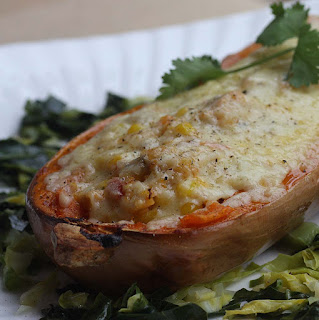 Today I will share a vegetarian Zimbabwean Butternut Squash recipe.  But before I share the recipe, I would like to shine a little light on Zimbabwe.  Since 2000, the scale of state violence, the political instability and economic deprivation  in Zimbabwe has seen the UK receive refugees from there.

A refugee is someone whose asylum application has been successful and who is allowed to stay in another country having proved they would face persecution in their homeland. 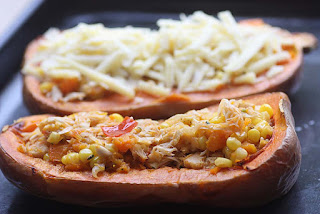 Zimbabwe's human rights record under Robert Mugabe has been criticised by the international community, including the European Union, UN, US and other countries. Mugabe's authoritarian regime has used force and torture to oppress political opposition. But not all Zimbabweans in the UK are refugees.  The NHS has attracted many Zimbabwean doctors and nurses, so it is important to recognise and embrace the positive contributions made by Zimbabweans too. 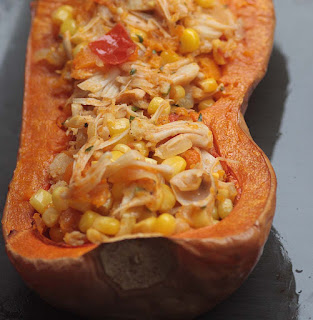 Zimbabwean cuisine is heavily meat based.  However there are some crucial vegetable based dishes, but they are staples and are often served as accompaniments such as covo, maize and sadza.   Sadza is made from maize.  It is described as a across between mashed potato and rice. Covo is a green vegetable similar to spring greens and is often served with sadza, meat and sauce.

After speaking to two of my colleagues, both of Zimbabwean heritage, they both recommended a Pumpkin dish, a change from the traditional Peanut Stew known as Haku ne dovi, but like true African men neither cooks.  One relying on his mothers cooking ;and the other on his wife's, neither were not able to give me a recipe.  I did a little research and got their approval on the authenticity of a vegetarian dish made with Gem squash.  The only comment was that they had had this dish, but it wasn't filled up so much with additional ingredients.   I went ahead and adapted the recipe with the more readily available butternut squash in the UK.  The roasted butternut squash was really delicious.  It was cooked well that you could literally spoon it from the glossy skin like mash lifting upon your fork popping sweetcorn and melty cheesy goodness.  The original recipe states that you could make it with your choice of protein, instead of some cooked beans like kidney beans, I decided to add Jackfruit.  It was truly one of the best dishes I have made without the addition of spices, just some fresh herbs and seasoning.  This is made with cheese, but is very easy to veganize.  I am sharing this with Bake of the Week hosted by Casa Costello and Maison Cupcake; Cindy for Gluten Free Fridays
and CookBlogShare hosted Hijacked By Twins; 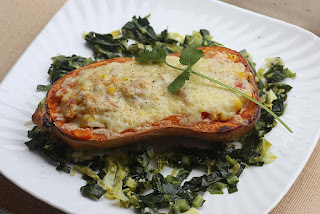 Other related posts
Somalian Fava Beans
Syrian Cauliflower Zahra MnazaletZimbabwean Butternut Squash
Serves 4
Ingredients
2 butternut squash, carefully sliced in two lengthways, seeds removed and hollowed out
Olive oil
1 medium onions, finely sliced
1 fresh tomato, diced including seeds
1 x can of Jackfruit, drained and rinsed
200g sweetcorn, either from a can or from a freezer, defrosted
50g fresh coriander, minced
100g cheddar, grated
Method
Preheat oven to gas mark 200oc.
Baste the sliced butternut squash with olive oil and transfer to oven and bake for 45 minutes or until cooked through, check this with a fork.
While the butternut squash is baking.
In a wide pan, heat 2 tablespoons oil, then stir in the onion and cook until really tender, then stir in the tomato and cook for a couple of minutes to warm through, before stirring in the jackfruit.  Leave to cook on one side for 15 minutes, before turning over the jackfruit and cooking the other side for a further fifteen minutes, then with a fork press the jackfruit to shred.  Stir in the sweetcorn , coriander and season to taste and then cook for a further 5 minutes.
Turn of the heat.
When the butternut squash is cooked, allow to cool for 10 minutes, before stuffing the cavity of the butternuts squash with the filling.  Sprinkle over the cheese.
Bake for 10 minutes or until the cheese has melted.
If you want it golden, place under grill.
Serve immediately with some greens.
Adapted from this recipe. 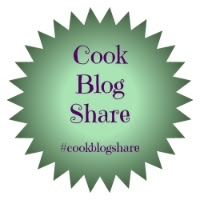 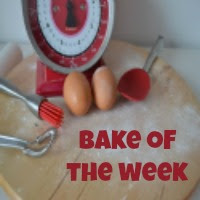