I’ve seen numerous pasta dishes made with lentils, but I don’t ever recall eating one myself. So this evening for ease and simplicity, I decided to cook a recipe in one of my cookbooks that I've had bookmarked for a long while.

The other reason I decided on making this recipe was its use of fresh ginger. Today D is feeling a little under the weather and my throat is also a little croaky, so the idea of fresh ginger sounded both medicinal and comforting. One other thing, the original recipe is made with butter, but because I didn’t want to aggravate my sore throat further, I made this with olive oil. The final dish doesn't look that interesting, but you know what they say 'looks can be deceptive'. The lentil sauce was tasty and I really liked the fresh bite of the ginger. It may be an ordinary pasta dish, but it’s a good recipe to keep in mind when your low on fresh produce or want to make something quick with store cupboard ingredients. It sure does fill you up and I feel much better having eaten it. 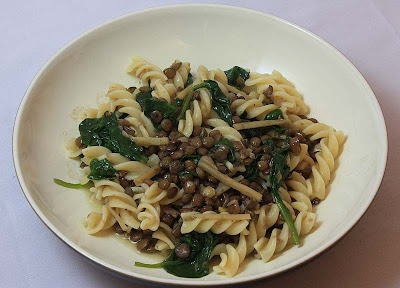 Pasta with Brown lentils and ginger
Serves 2 – 3
Ingredients
Enough pasta for 2 - 3 people such as fusilli or penne
4 tablespoons olive oil
2- 4 cloves of garlic, sliced
1 2 inch piece of ginger, sliced into thin strips
½ teaspoon crumbled dried sage
165g or ¾ cup brown lentils, washed and rinsed
400ml or 2 cups water or vegetable stock
100g or 2 cups of fresh spinach
Salt and pepper to taste
Method
Cook pasta according to instructions, drain and set aside.
In a large pan , heat oil over medium heat, add garlic and ginger and cook for a couple of minutes, stirring constantly. Then add the sage, the lentils and all of the water. Bring to a boil, cover the pan and reduce heat to low. Let the lentils simmer for 10-15 minutes or until they are tender, but still a little chewy. Stir in the spinach and salt and turn the heat up. Stir often until the spinach wilts, about a minute or so. Then add the cooked pasta and season to taste, and heat the mixture through. Serve immediately. Adapted from the Vegetarian Planet.