My oldest nephew has come up for a long weekend and with him he brought me some goodies from Wales. Here are a few. 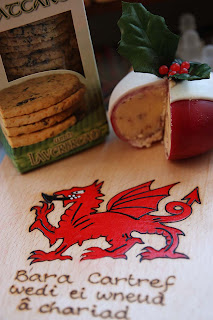 Laverbread oatcakes, cranberry cheese - not very Welsh I know, but very seasonal and a bread board inscribed in Welsh 'Bara Cartref wedi ei wneud a chariad' which translates as 'Home made bread made with love'. I have some tinned laverbread too. I actually still have a stash left over from his last visit. Laverbread also known as 'Seaweed bread' is seaweed porphyra umbilicalis gathered from rocks around the coast. It is rinsed repeatedly in changes of water to get rid of grit and sand, then soaked in fresh water to reduce its strong salty flavour. Then it is cooked gently in water until it is reduced to a mush literally. I like to describe it as the 'Saag of the Welsh world'.

I would never have described Laverbread as gourmet food. Apart from the way it looks - jet green, its distinct smell from the iodine content was more likely to turn people off it before they even had a chance to try some. But it seems that things are changing. The 200g tin my nephew gave me cost almost £3.00. Looks to me that laverbread in Wales is making a comeback. The best known dish made with laver is laverbread cakes. Its a very simple recipe, 200g laverbread is combined with 50g rolled oats then fried. It is often served at part of a Welsh breakfast.  Talking of gourmet food, my nephew told me that there is even a Laverbread Caviar, now that is one I look forward to seeing, and if its vegetarian - even trying - so I hope he brings me some next time he comes up to visit me here in Scotland.

Anyway, yesterday in an effort to use some of my store cupboard ingredients one of which included a tin of laverbread, I decided to create some Welsh Vegetarian Burgers for Brunch. 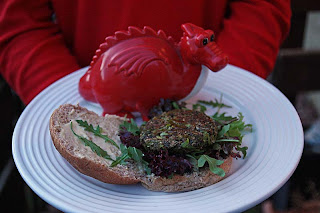 Now in all my time of growing up and living in Wales, I have never ever had a Welsh Vegetarian burger, so thought wouldn't it be cool to create one, or at least attempt to create one using the recipe for 'laverbread cakes' as a starting point. I had bucket loads of leeks picked up on Saturday, but no Caerphilly cheese. You can't make a Welsh vegetarian burger without Caerphilly yells my nephew. He is right. I remembered the last time I tried to make a Welsh recipe I struggled to find Caerphilly cheese in Scotland. I searched high and low for the real stuff, even the West Ends cheesemonger informed they did not keep any. Anyway, determined that I was going to make some burgers with the laverbread and Caerphilly cheese it occurred me to try, this place which opened up early last year. Well I was so glad I did. I was the first person to get a wedge of Caerphilly cheese from the wheel. It wasn't particularly cheap, but it was worth this novelty treat - a little taste of home. These Welsh Vegetarian burgers or 'glorified Laverbread cakes' as my nephew called them, were a great success. 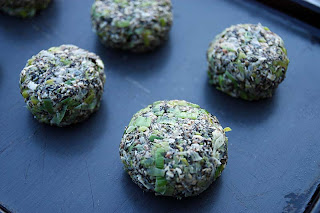 Glorified laverbread cakes aka the Welsh Vegetarian Burger
Makes 5 - 6
Ingredients120g tinned laverbread
75g - 100g rolled oats, medium or jumbo (I used a mixture of both)
1 tablespoon olive oil
1 large leek, washed and sliced
50g fresh breadcrumbs
50g Caerphilly cheese, grated or vegan alternative
1 teaspoon mustard
Pepper to taste
Vegetable or olive oil for shallow frying
Method
In a bowl, add the laverbread and rolled oats and combine well. Set aside for it to firm up.
In the meantime, heat olive oil and add leeks and cook on low heat until soft. Stir into the laverbread and oat mix, then add in the breadcrumbs and combine well. Gently stir in the Caerphilly cheese or vegan alternative, mustard and pepper to taste. Then divide the mixture into 5 or 6 balls and shape into patties or burgers. You can either leave these in the fridge to firm up or cook immediately. Heat about 4 tablespoons oil, when hot add the burgers, shallow fry for about 4 minutes before flipping over and cooking for another 4 minutes or until golden. Press gently with a spatula if necessary. Enjoy immediately, either in a bread roll or as a side with wedges or chips.