I have to admit when I picked up this beautiful bunch of purple kale at the weekend, I had grand ideas of making a big bowl of purple kale chips to enjoy in front of a movie. I had discovered kale chips 3 years ago and absolutely adored them. It is perhaps my preferred way of eating kale.

Oh actually there is another way that may interest you. In one of the cookbooks I have, the kale chips recipe is taken a step further. Once the kale chips are made, cool them on a rack. Then whizz them in a food processor briefly either to rough flakes or ground fine, like pepper. You can then use the ‘kale flakes’ or ‘kale pepper’ to sprinkle over roasted vegetables, soup or even popcorn, it’s a bit like the toasted seaweed nori really, just more flavoursome. 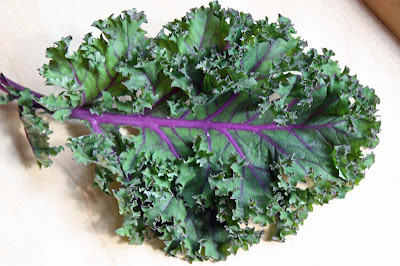 Well neither of the above recipes were enjoyed at the weekend as the working week was upon us rather quickly. Instead I made a 'Purple Kale tart'. It was inspired by a recipe I had seen at the dentist. Let me explain, a couple of weekse ago whist waiting for my check-up, I had picked up one of those lifestyle magazines. Like a football fan interested only in the recent sports coverage, transfers and so on found in the back pages of tabloids; and in my case to avoid benile WAG and celebrity gossip, I too go straight to the last few pages, where you tend to find recipes.

I remembered one particular photograph leaping out at me. It was a pizza topped with glossiest sauteed kale and sharp white feta cheese. It looked really good to me. Now had I a pen, I would have jotted the recipe down; or dare I admit slowly ripped the recipe page out, but as there were a number of people also waiting for their dental appointment, periodically glancing up and down, I dare not. Instead I decided to look over the recipe and convince myself that it was actually a rather simple recipe and one I could easily remember. So I logged some of the ingredients in my head, the quantities of course I would have to work out according to taste. So this is my take on that sauteed kale pizza, except mine is not a pizza - more of a tart. 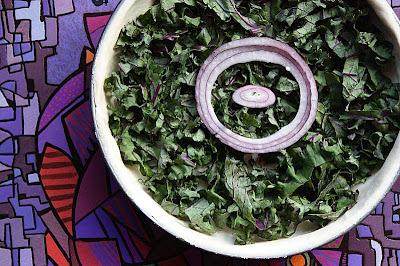 As I had cooked this dish today straight after work, I was too lazy to ‘knock up’ a pizza base from scratch. In its place I used an ingredient that can always be found in my fridge: a packet of ready-made puff pastry. I rolled it out to fit and 8 inch round cake tin. Roughly chopped the purple curly kale and sliced a medium red onion. Then I added this to a frying pan with some good olive oil and sauteed. When the kale began to wilt, I seasoned it with a little pepper before spreading it evenly over the puff pastry base. To end I crumbled some feta cheese, (can be omitted for vegans). Then baked it in the oven at gas mark 6 for 25 – 30 minutes. 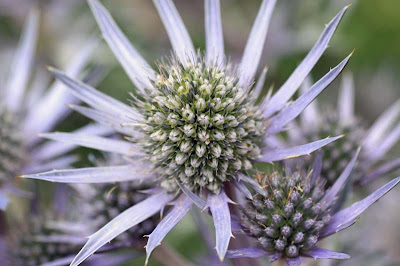 The purple kale still retained its vivid colour. The kale itself was both soft and crisp. I think some sliced black olives would have enhanced the flavour a touch more, but that's up to you. When I was a child, I really disliked black olives. Oh how our tastes change. 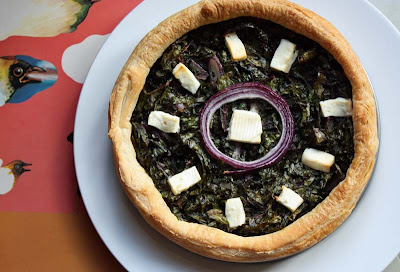 If you like the look of this savoury purple kale tart, and are liking the theme of 'purple' please take a peek at my sweet lavender hearts, lavender lemonade, purple cabbage potato cakes and finally some purple blueberries. They may just inspire you. Enjoy the rest of your day.