After a bit of gardening and enjoying the rhubarb and ginger pancakes for brunch, late that afternoon I decided to carry out another cooking experiment with the rhubarb. Of course I could have made my usual muffin frenzy this time flavoured with rhubarb and ginger, but I actually fancied some with a bit more bite and crunch. Rhubarb flapjacks, no I remembered the Drooling Vegetable being disappointed with them. Biscuits, nah I didn't want to be fussing to much over them. Cookies, yeah why not. I could do with some good homely cookies, but was I going to bake some rhubarb and ginger cookies. Of course not, I wanted to be a bit different and decided on replacing the ginger with some some lovely rosemary growing in the garden. I had no doubt that these flavours would work, as I remembered the Rosemary, lemon and parsnip tart I made last year being quite a hit too, so what could possibly go wrong here?!

Actually nothing went wrong. The taste was wonderful and there was something quite warming and therapeutic about the rosemary, but these cookies were far from perfect. I had added a little too much rosemary and this was competing too much with the rhubarb flavours. So I've adjusted the recipe below reducing the rosemary from a teaspoon to half a teaspoon. Please do give it a go. I think you will be pleasantly surprised. 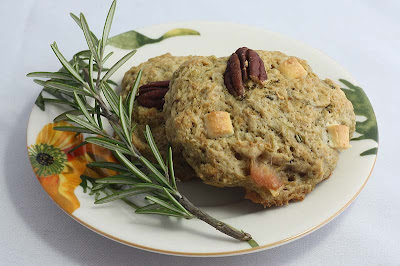 The leaves of the Rosemary (Rosmarinus officinalis) are widely used in cooking, but as I mentioned earlier I also 'felt' its therapeutic qualities or maybe that was just me unwinding from a long day of gardening and cooking. Who knows, but you cannot ignore some of the traditional uses of rosemary. It has been used to relieve muscle pain (those long hot bubble baths with a drop of two of essential rosemary oil) and support the circulatory and nervous systems. I have even found myself soaking a handkerchief in with a droplet or two of rosemary essential oil to sniff and ease my blocked nose, so it does have some medicinal value or healing properties.

I have also decided to submit this baking experiment to this weeks Weekend Herb blogging. WHB as it is fondly known was started by Kalyn of Kalyns Kitchen. It is now organized by organized by Haalo of Cook Almost Anything Once. I think this is a great way to get food bloggers to cook with what is in season and growing locally. This weeks WHB challenge #232 will be hosted by Lynne from Cafe Lynnylu. 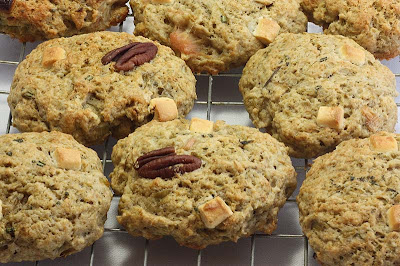 As my oven is quite small, I had to make these in four batches. This had an knock on effect on our meal on Monday which was a public holiday in the U.K. So instead of sitting at the table at around 6pm, it was gone 8pm, but that was okay as it was a light evening meal, just the cabbage, parsnip and apple pie no accompaniments. And of course one or two of these cookies.
Rhubarb and Rosemary Cookies
Makes about 24 cookies
Ingredients
350g rhubarb, chopped, cooked and drained of its juices. I usually bake my in the oven with a drizzling of sugar until soft, but use whatever method works for you.
125g butter
120g light brown sugar
1 egg
270g plain flour
Pinch of salt
1 teaspoon bicarbonate of soda
½ teaspoon rosemary, finely minced
50g white chocolate buttons
100g pecans (optional)
Method
Cream the butter and sugar together. Add the egg and beat until light, then stir in the rhubarb. Stir the flour, salt, soda, and rosemary and toss until thoroughly mixed. Stir the dry ingredients into the rhubarb mixture until the two are blended, then combine in the white chocolate. Drop the batter by the tablespoonful onto greased baking sheets about 1 ½ - 2 inches apart. Press in the optional pecan nuts if using, and then bake in a preheated oven at gas mark 5 for about12 minutes, until lightly browned at the edges. Transfer to a wire rack to cool and harden off, before storing.