The old and the new

It's Heritage Open Days in the U.K, except for some reason in Scotland it's called Doors Open Days. Anyway, the idea is you are given free access to hundreds of fascinating buildings across the U.K. Every weekend in September you can explore places that are normally closed to the public. Some open up once a year, some just once in a lifetime... 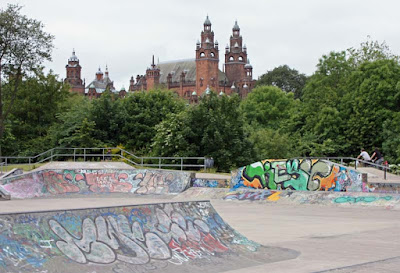 Can you guess?! Yes, the Kelvingrove Art Gallery and Museum that is open pretty much all year round. Are we nuts? This picture was taken from the Kelvingrove Park. I like the way the modern graffiti art and skateboarders playground is set against the grandeur of the Museum. 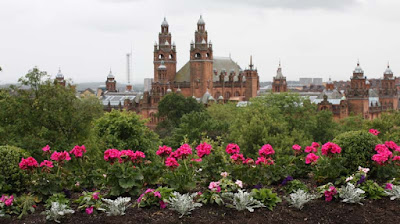 This picture is taken from Glasgow University, another perspective of the Museum. You can see why we decided to go the the Museum, the overcast of the dark clouds kept threatening to rain, so shelter was very much welcomed. C'mon let me take you into the museum. 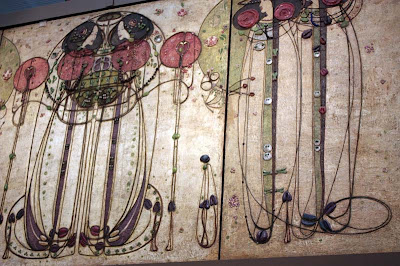 Most people equate Glasgow with the works of Charles Rennie Mackintosh, and this is so 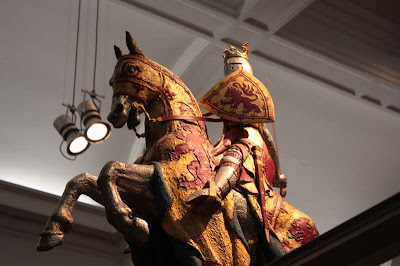 but I want to show you what I saw through my eyes. This looks like a scene from The Fisher King. 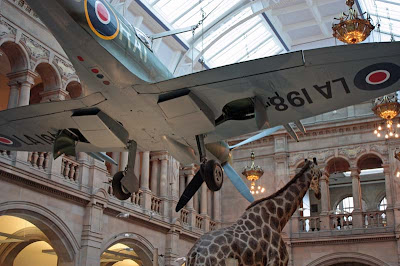 And this one likes like a scene from the amusing movie Night in the Museum. Am I on a movie set? 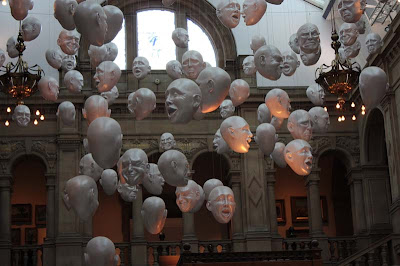 I really loved these heads hanging from the ceiling. 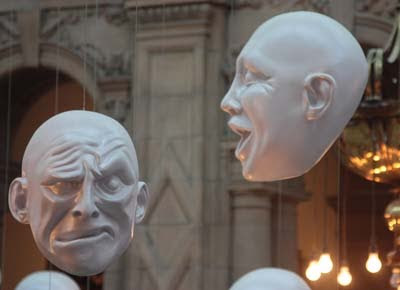 Each and everyone with their own expression.
Some funny, some sad... 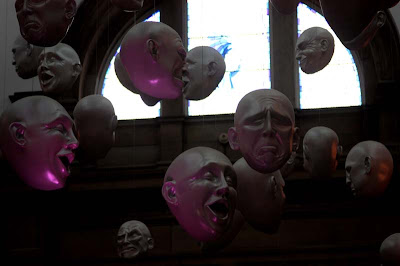 Some angry, some cheery, 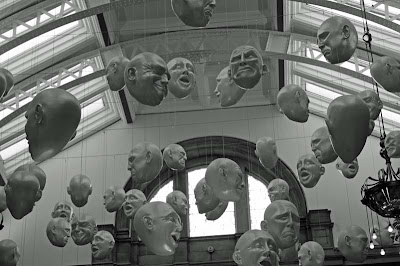 Okay enough of these. May I introduce you to Elvis, or at least a caricature of him. 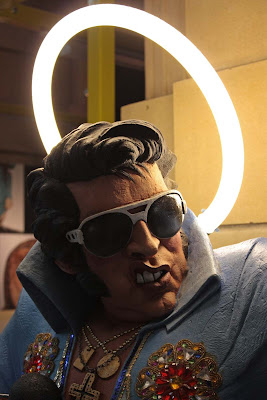 I saw this piece originally at the GoMA museum. 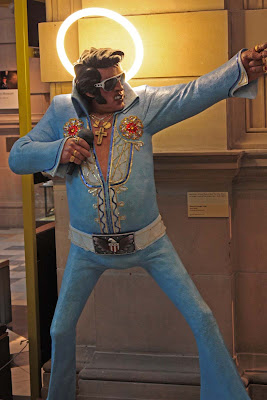 It was quite popular then and still is, I can see why the Kelvingrove have acquired it. It is a popular photo-shot by all who come through these doors. Am I right Nic?! 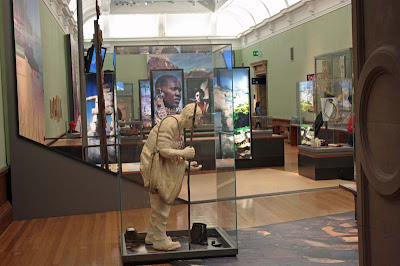 I have been to the Kelvingrove a few times, and each time I go back I see something different, something I missed the first, second,third and fourth time around. 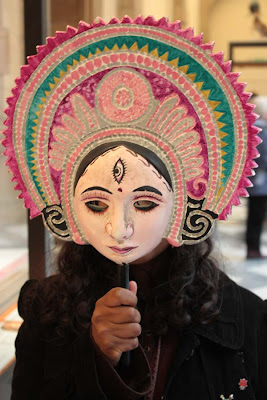 There were a number of 'exotic masks' in one of the Children's Learning section for educational purposes. I couldn't resist... 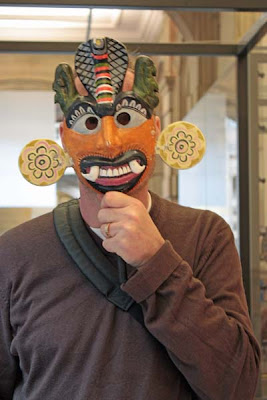 Then I got D to pose as well. He's quite handsome under all that - really! Well I think he is. 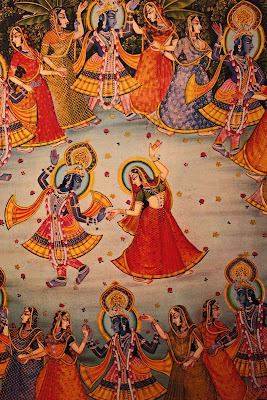 Amongst our child play, we were quite serious in our observations or the works displayed at the Kelvingrove. This was a poster depicting the Hindu God Rama. After it's refurbishment, the Kelvingrove Museum has made an attempt to recognise some of the 'migrant communities' living in Scotland. 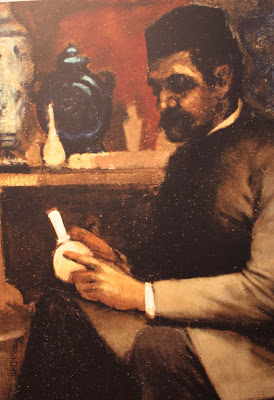 This is a painting of a Bengali potter who came over for the 1888 Empire Exhibition. I think this is one of my favourite images. 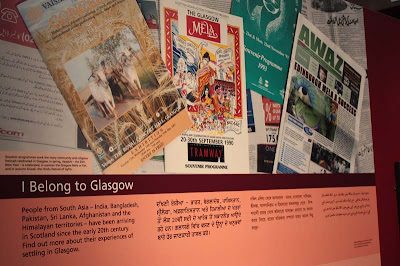 "I Belong To Glasgow" is a song written by the music hall entertainer Will Fyffe, in 1927. It is one of a very small number of pre-war songs still well-known today, and has been covered by number of artist including Eartha Kitt. Around 2005, the song title was adopted by a number of solidarity groups, challenging the 'racial tension' in Glasgow, especially around asylum seekers and refugees of colour arriving from places like Afghanistan, Eritrea, Iraq, Somalia and Sudan in the late 1990s. These new migrants dubbed by many as the new Scots were being victimised in parts of Glasgow, some even brutally assaulted. Solidarity groups asserted that these new Scots belonged to Glasgow. Glasgow City Council even designed a poster around this, it was all over billboards, bus stops and buses at the time. The poster depicted people of various ethnic and cultural backgrounds, all claiming that they 'belonged to Glasgow'. The poster also touched on another issue: sectarianism on relationships between Protestant and Catholic communities in Glasgow. 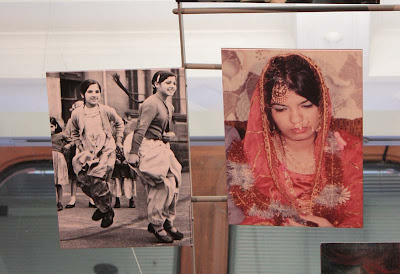 These are some more images of migrants from South Asian (Indian, Pakistan, Bangladesh) backgrounds now living in Glasgow. Some school girls skipping, the other a Bride. For some brides it is the happiest day of their lives, for most South Asian brides it is the saddest day of their lives as they are leaving the home of their parents - their cradle.
I really loved this painting, sorry it's the best I could do. It depicts the links between the Punjab and Scotland. Click on it to see if you can identify any of those links. 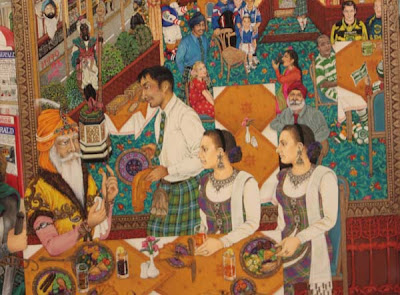 Here's once slightly closer. You can see the Celtic (Catholic) and Rangers (Protestant) football shirts in the back, the Sikh lad and lasses wearing Tartan outfits. It really is an interesting ands intriguing painting. 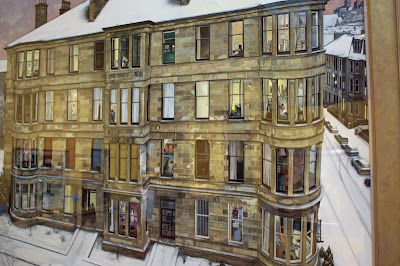 This image is so true too. Have you watched The Royal Tenenbaums. When I lived in Glasgow during my University years, I was astounded by these tenement flats, so sturdy, unless the flimsy buildings you see these days. 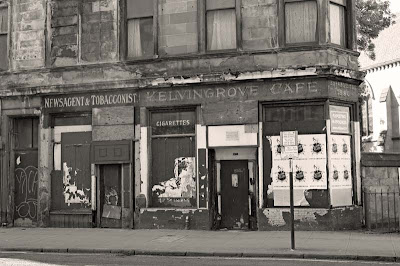 As we left the Museum, we came across this building. It is not that far from the museum, the modern artwork had been removed to reveal some of the original signage below it. This cafe opened in 1890, two years after the Kelvingrove Museum opened. Fascinating, what you can find if you look.

Email ThisBlogThis!Share to TwitterShare to FacebookShare to Pinterest
Labels: Parts of Scotland, travel