A couple of weeks ago, I was complimenting the neighbours little girl below, I want to take it all back (well I feel like it). This morning when I opened the door to be warmly greeted by the beautiful red hot pokers that had recently emerged like natural lamp posts with their orange fire glow, brightening the dull grey front view, but now they were all gone. 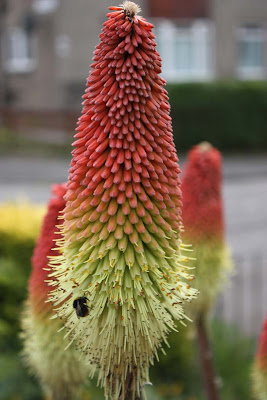 The beautiful red hot pokers that were attracting bees from all over had all been snapped off. This had happened last year and D had put it down to kids walking by and snapping them off, but later we found out it was the neighbours below. The bees are obviously ‘bothering them’ fear of being stung. But bees are generally friendly and will not sting unless feeling under threat, they are not interested in human beings, but the pollen of the plants nearby. I am so angry at them, but nothing I or anyone else could say to them would make a difference, if the bees are bothering them, they’d rather not have them near them, and they were growing in their section of the front garden drive, so there was very little I could do, except loudly vocalise that it was a shame that such beautiful plants had to be snapped off. 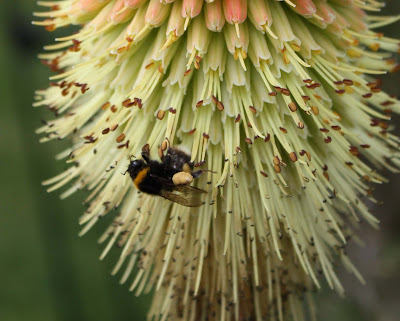 I had taken these pictures of the red hot pokers about a few weeks, so glad I managed to capture some before their demise at the hands of the human.