Growing up in the UK, I would often hear about Melas being held in parts of England, namely London, Leicester, Birmingham and Manchester, cities that had a large diverse population. The word ‘Mela’ has different meanings to different people. Originating from Sanskrit and meaning ‘to meet’ or ‘gathering’, in Hindi or Urdu the word also means ‘fair’ as in funfair. Nevertheless, the concept of Mela has developed across the world to represent a coming together of many peoples, from varied background and cultures, meeting in celebration of their shared cultural diversity.

There was nothing happening in Wales at the time. During my university years in the mid 1990s, I used to live in Glasgow and there was hardly any mention of a Mela, except what was happening in Edinburgh. The Edinburgh Mela was originally founded in 1995 by members of the city's South Asian communities who wanted to celebrate significant religious events like Eid, Holi or Diwali and acknowledge the diversity within them. What started of as small low key annual indoor event developed into a grand outdoor spectacular sensations, since then the Edinburgh Mela has grown into one of Scotlands leading celebration of cultural diversity through the arts.

What I as a non-Scots person (without allegiance to either city) have noticed and have found quite amusing is that Edinburgh and Glasgow are always competing with each other, in relation to showmanship and tourism.

Anyway, according to some of the Glasgow websites, Glasgow Mela was created in 1990 for city’s European City of Culture status, apparently well before the West End festival which is in its 14th year. However research shows me that although there was a Mela type event held at the Tramway in 1990, this did not mean that Melas were being held thereafter in Glasgow. So I don’t know if history is being rewritten, but I did really think that Edinburgh Mela came before the Glasgow Mela. For me awareness of the Glasgow Mela came in 2000 and it was rather disappointing affair and did not live to my expectations. I heard from some community group representatives there that the Glasgow Mela was only in its second year so it was still having teething problems in establishing itself. So much so that many of the Glaswegian South Asians I knew would travel to the Edinburgh Mela as it was much more developed, vibrant and lively in comparison.

These days the Glasgow Mela runs alongside the West End festival and Scottish Refugee Week. These events combined attract thousands of visitors. This year the Glasgow Mela took place at the leafy Kelvingrove Park in the city's West End.

These are some of my limited pictures from the day, all with emphasis on food, of course. 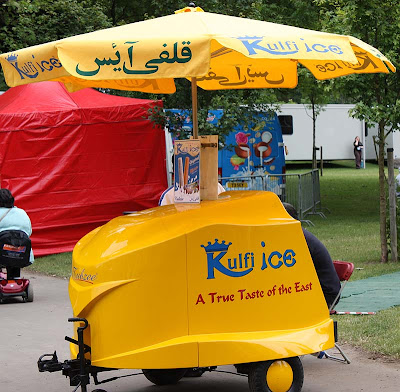 If you have a seriously sweet tooth. Here are some South Asian sweet delights: Kulfi and Falooda stalls 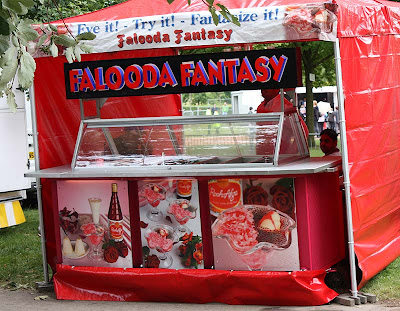 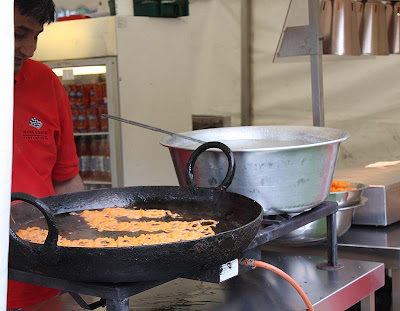 As I left I did hear someone grumble 'bogs, burgers and booze' - I feel better to know that I am not the only one discontent with the mela. But thumbs up, that there is something like this happening in the city for the locals to enjoy. Things can only getter better.

Email ThisBlogThis!Share to TwitterShare to FacebookShare to Pinterest
Labels: events