As a welsh girl, I have to say a few words about Welsh cheese, and in particular Caerphilly cheese as I have been cooking a lot with it recently. This vegetarian cheese is made in South and West Wales. When young, Caerphilly has a moist, supple texture and fresh taste. However, with age, it becomes creamier around the edges and more flavoursome. This welsh cheese is less crumbly than its English counterparts such as Wensleydale and Lancashire.

If you get a chance try and get hold of a proper mature Caerphilly cheese. It really makes a difference from the crumbliness of a supermarket one. The real Caerphilly cheese has a proper rind with a soft yellowing edge and a creamy centre. Hence the famous Welsh rarebit, cheese on toast – you won’t get that lovely melty sheen with a crumbly cheese. Saying that I found it really difficult to track down authentic Caerphilly cheese in any of the local Scottish supermarket, I even tried I J Mellis: the West Ends best cheese monger who informed me that they no longer stock it, but had similar crumbly type cheese. Eventually I did track some down, but it was a supermarkets brand, not the real stuff, it will have to do for now. 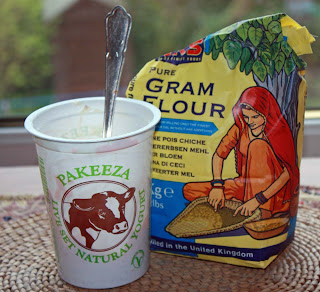 You can make pakoras from any vegetable: aubergines, mushrooms as long as you make them with besan, also known as gram flour (chick pea flour). These pakoras are made with welsh flavours: finely shredded leeks and cubes of Caerphilly cheese. I served them with grated carrots stirred through natural yogurt , yes they are the carrots from the garden plot. I appreciate this may not be to everyones taste, but have a try at least.

Pakoras are not the easiest to photograph, they look rather messy, but let me tell you they are so delicious, you'll be going back for more. 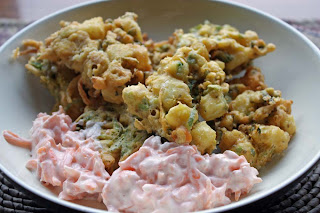 Heat the oil in a large pan or deep fat fryer, drop a few large tablespoons of batter gently into the hot oil, cook on one side for a couple of minutes until crispy and then turn over until the other side is crisp and golden too. Do this until all the pakora mix is used. Eat immediately, while fresh and crispy.