My first Christmas with Ds parents saw me introduced to shockingly yellow drink known as eggnog. It was served to me with lemonade and looked like banana milkshake laced with cinnamon and nutmeg. I actually didn’t mind it at first, but after my third glass I was sick of its heavy silky texture. Eggnog is a sweetened dairy-based beverage traditionally made with milk, sugar and beaten eggs. I have also seen a number of vegan alternatives recipes to eggnog. Eggnog is a popular drink throughout the States and Canada, and is usually associated with winter celebrations. As such the one time I see this turmeric yellow bottle is around the Christmas festivities.

D had a craving for some eggnog on Christmas day, hence the bottle in our home. So after he had satisfied himself with a couple of glasses, I was left with an on open bottle. Once opened, eggnog is one of those drinks that does not keep well and has to be consumed, or thrown away. As someone who does not like to waste, I set about finding recipes to use it up as there was no way I could drink more bubbly eggnog. 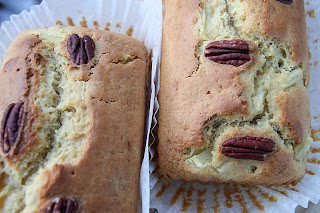 I have often seen eggnog used as a flavouring for both drinks and baked goods such as eggnog scones, eggnog ice-cream and eggnog coffee, but I settled on the idea of making an eggnog loaf studded with golden pineapple chunks. I did not go out of my way to purchase a can of pineapple rings for the recipe. I actually stumbled upon a can whilst hunting for the tinned pureed chestnuts for the soup. (I also found a can of water chestnuts and mango puree). So for me this was the right recipe to make.

On first bite, the eggnog and pineapple loaf reminded me of a cake my father would often bring home for his children known in the U.K as Iced Squares, also known in some parts as Iced Custard slice. D said this loaf had a touch of Madeira cake about it too. It was really nice, moist and light. 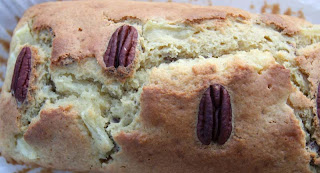 So if you have a open bottle of eggnog that is unlikely to be drunk in the next few days, please do give this Eggnog loaf a go. You can substitute the pineapple chunks for fat juicy raisins, and the nuts with walnut if you wish. 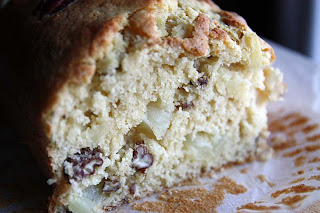 This is a moist loaf and is best made a day in advance.
Eggnog and Pineapple Loaf
Makes 2 loaves
Ingredients
450g self raising flour
110g caster sugar
1 teaspoon baking powder
½ teaspoon salt
½ teaspoon freshly grated nutmeg
1 medium egg
200 - 250ml eggnog (that is all I had left in the bottle)
100ml vegetable oil
1 x 432g pineapple in juice, chopped if whole
80g chopped pecans
Method
Preheat oven to Gas mark 4. Grease with oil or line two loaf tins with baking parchment paper. In a large bowl, whisk together the flour, sugar, baking powder, salt and nutmeg. In a separate bowl, mix the egg, eggnog, oil and pineapple. Add the dry ingredients to the wet ingredients and stir until well combined. Gently fold in the pecans.
Pour the batter into the loaf tins. Bake for 50 minutes to an hour or until a toothpick inserted comes out clean. Allow to cool for 10 minutes, then remove and cool on a wire baking rack. Recipe slightly Adapted from ‘Tis the Season by Nanette Blanchard.