The weather forecast in the West of Scotland was predicted to be not too good today, so we opted to head to Fife. On the itinerary was a visit to a Palace, a farm shop and an antique shop called 'Violins'. We arrived at our first stop and were immediately intrigued by this. 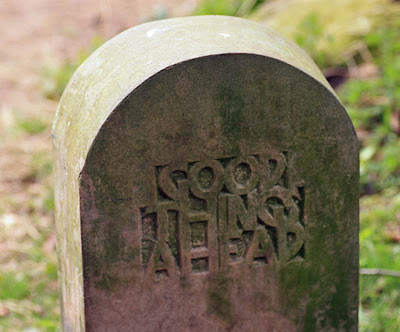 This looks like a 'tombstone', but its actually not. Its a marker encouraging you to take a wander into the forest. Once you walked through the tall pine trees, past these incomplete wig-wams, over a little bridge with a stream running beneath it. 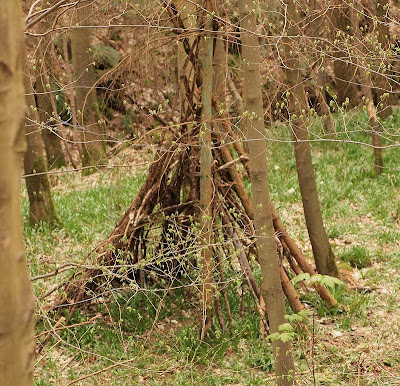 You come what is known in Scotland as 'drystane dykes'. Drystane literally means drystone. Dykes are a characteristic feature of most upland areas and many parts of lowland Scotland. They are a popular feature in Scottish agricultural landscape designed primarily to form field boundaries. 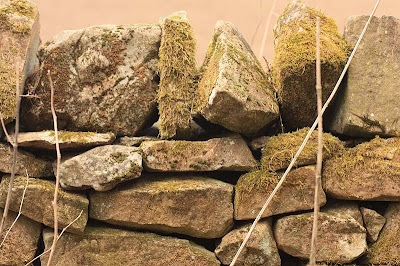 Anyway, whilst walking past this rather attractive mossy dyke. I started noticing something different about this one. Every so often you would come across a stone with 'words' engraved on them. 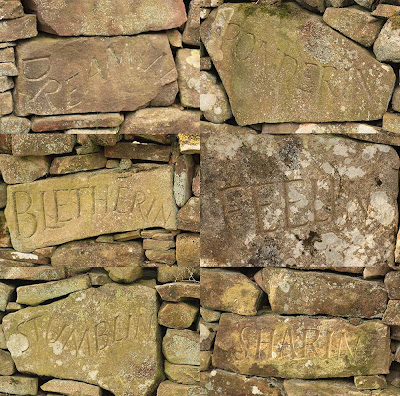 These are a few that made me smile: dreamin(g); ponderin(g); feelin(g); sharin(g); stumblin(g); and finally bletherin(g). A good Scottish word meaning to talk nonsensically or utter foolishly. It was one of the first Scots slang I learned when I moved up to Scotland. 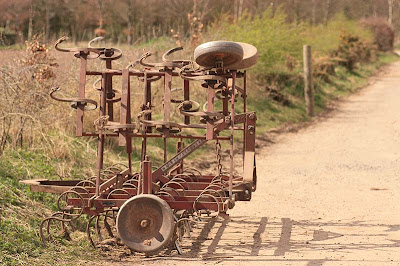 Upon reaching the end, you come across a table with a sign giving you the price of turnips, potatoes and eggs. But how does one pay as there was noone there to take you money. Well a little hole had been had been inserted into the table, where people are trusted to pay for what they take. This is called an 'honesty box'. Now how often do you see that? I would have taken some turnips, but there were none there, so we continued walking towards the Pillars of Hercules, which is the farm shop I wanted to visit anyway. 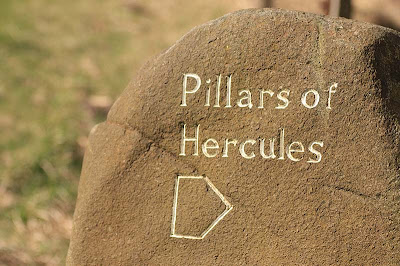 Some of you may remember we came here last year, but for those of you who don't know. Here's the link. 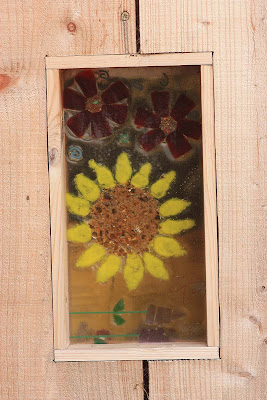 No sunflowers there at the moment, but still plenty of work going on and lots growing albeit a little slowly. I really wish the first rhubarb had already grown and been harvested, as I really really want to eat some. This is quite unusual for me because I never really liked rhubarb, I used to find it really sharp until of course I started growing my own. Also, now I just appreciate the seasonality of this vegetable, and it is a vegetable not a fruit (so I've been told). 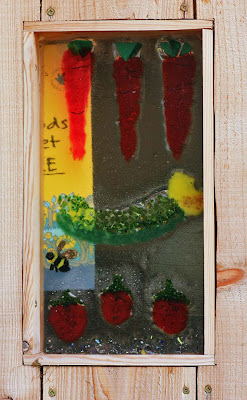 There may not have been any rhubarb in the farm shop, but there was plenty of other vegetables. 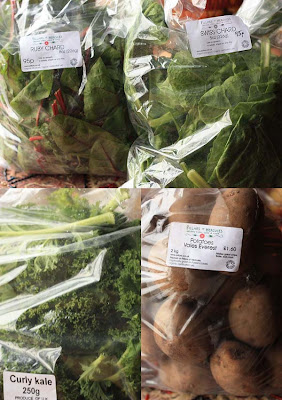 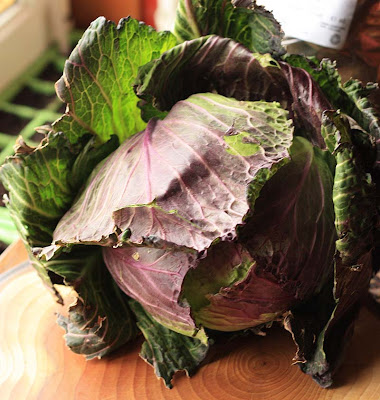 A beautiful January King cabbage. I also got some Curly Kale but not from here. I got it from Cupar Farmshop. According to the the Pillar of Hercules chalked blackboard, the curly kale that they had planted here had been ravished by the pigeons. 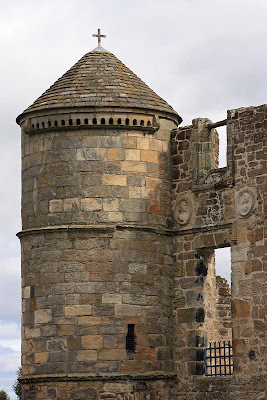 Our next stop was Falkland Palace. Last time we only saw the outside of the building and were quite impressed by it. This time however, as members of NTS had the opportunity to explore the inside. Other than admiring the painted ceilings and an intricate four poster bed imported from Indonesia during the reign of James I of England and VI of Scotland. I was personally not that impressed by the Palace. So I am not going to say much about it. Just share a few images that caught my eye. 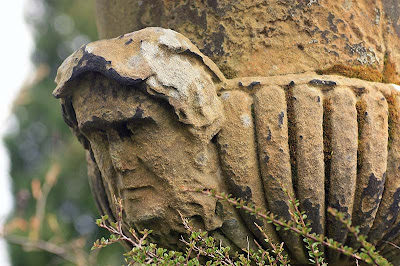 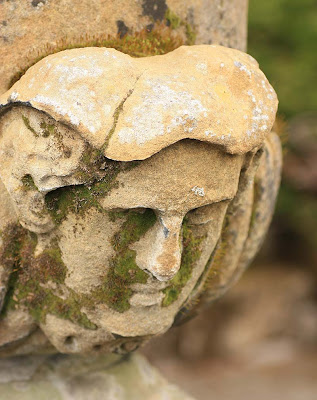 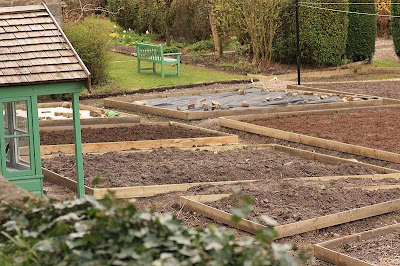 Overlooking the palace was someone plot. Oh how I envy. One-day. 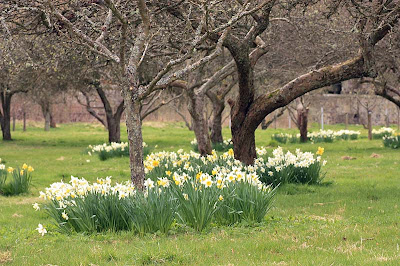 This was the Palaces orchard. Did you know that in Gaelic apples are called 'Abhalls'. No, well you do know. 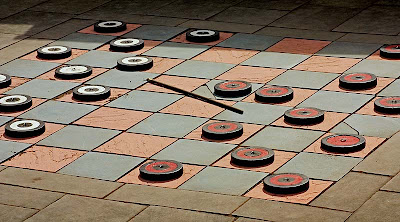 A very large game of draughts aka checkers. Do you want to play? After our very brief tour of the Palace, we drove onto a little town called Cupar. 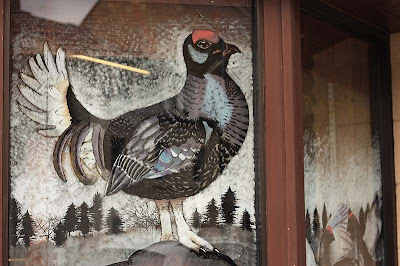 We were welcomed by this Black Grouse - not a real one. 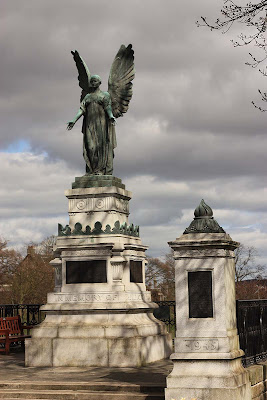 A beautiful angel in the skies. 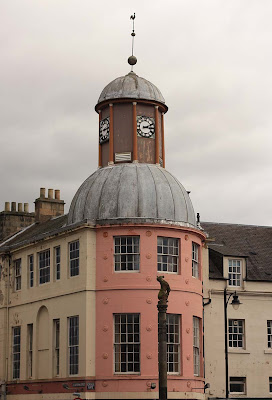 And then some cakes, lots of them. 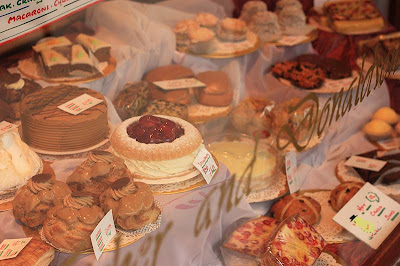 Although I wasn't exactly transported back to Paris where I spend my belated honeymoon last year, what this cake filled window managed to do was remind me of my time in Paris, when D and me greedily gorged on many sweet patisseries, cakes and bakes. Of course we had to go inside. 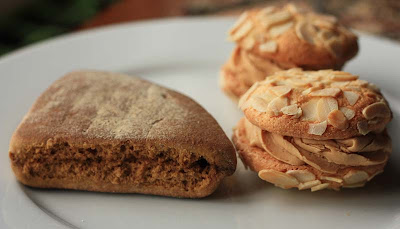 We went in and came out with a treacle scone and a couple of macaroon meringues, which we had as soon as we got home. The macaroon meringues were soft, chewy and sickly sweet! Whoops what will my dentist say?!