Yesterday, I spent two hours at Plot 11 while D tended to the tomatoes. I planted some more cabbages: hispi; greyhound and red marner and natalino cauliflowers. All the ones I had planted early last month, had either been munched by the slugs or the pigeons, hence needed replacing.

I have not been very successful at growing Brassicas, namely cabbages and cauliflowers. I feel like I am the only one having this problem as other fellow plot holders, have them growing well, albeit amongst the weeds and uncovered. Perhaps, I have trouble because I go for the lesser known varieties and they stick to tried, tested old fashioned brassicas. Perhaps…..Anyway, after looking at some of my fellow plots, I decided not to cover them with netting, just sprinkled some organic slug deterrent. 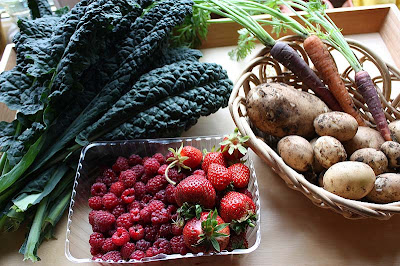 This coming weekend, D will have to build me a climbing frame at plot 11, for the runner beans that are literally dying to get out of their pots.

We also harvested some more potatoes, Toscana di nero, three rainbow carrots, 500g of raspberries, some strawberries and a handful of pea pods, that were consumed straight from the pod at the plot.