A few years ago after enjoying a beetroot salad that included halloumi cheese, D became very unwell. Although he is not confident that it was the halloumi cheese that caused his poorly state, in his head he still equates that not so well feeling with the cheese, so these days he is just cautious and avoids anything that has halloumi in it, which is unfortunate for me, as I really like halloumi, but I also like him and his well-being comes first. Ah the culinary sacrifices we make.

So in place of the Cypriot halloumi cheese in this dish which is based on Nigella's double potato bake, I replace the halloumi with cubes of feta cheese. 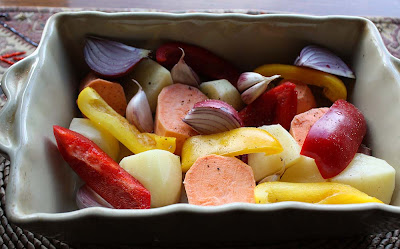 This dish has been one of our working week standby meals for years now. We have dubbed it Double potato and feta bake. 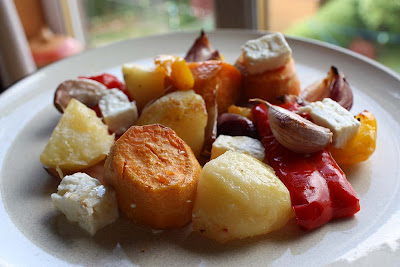 How easy was that?!