This dish was made with the baby leeks I had left on my plot on Saturday, fortunately it had not rained overnight, so I was able to rescue them the following day.

Leeks are notorious for hiding soil in between its layers. A few months ago, I learned this very good tip of getting grit out of leeks on TV from the chef Jun Tanaka, so I pass it onto those of you not familiar with it. Begin by making a vertical split about halfway down the centre of each one, then do this again, so you have four fantails. Then wash clean of grit by running them under cold water. Amazing. I use this method all the time now when cooking with leeks. 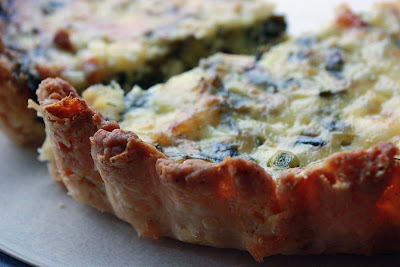 This leek and sour cream flan was made with the baby leeks I had left on my plot on Saturday, fortunately it had not rained overnight, so I was able to rescue them the following day. This recipe is adapted from Delia’s Vegetarian Collection. I made the shortcrust pastry base according to Delia's recipe, which included 50g grated cheddar cheese in the base, but the filling is adapted. On cooking, the pastry had shrunk quite a lot on the sides. I have read a tip somewhere, either to put it in the freezer for twenty minutes (my freezer is 6 cubic feet, so too small to do this) or in the fridge for 40 minutes to firm up before baking in the oven. I would have tried the latter, but patience was not on my side. So visually it is a hotch potch pastry, but it did taste good, nice crispy base. 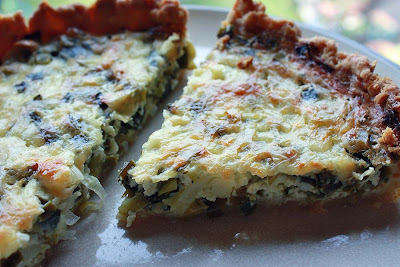 Ingredients
Make your own pastry case or use a prepared one
For the filling
250g baby leeks, washed, sliced and rinsed
150ml sour cream
50g butter
2 cloves of garlic, sliced
1 medium egg, beaten
50g cheddar, grated
Salt and pepper to taste
Method
Melt butter in large pan, add the garlic, leeks and some seasoning. Cook gently for 15 - 20 minutes until soft. Allow to cool.
Preheat oven gas mark 5
Now combine sour cream, beaten egg, with the leek mixture and combine well.
Spread the mixture over the pastry case, sprinkle with cheese and bake in centre of oven for 35 - 40 minutes until brown and crispy.
Adapted from Delia's Vegetarian Collection